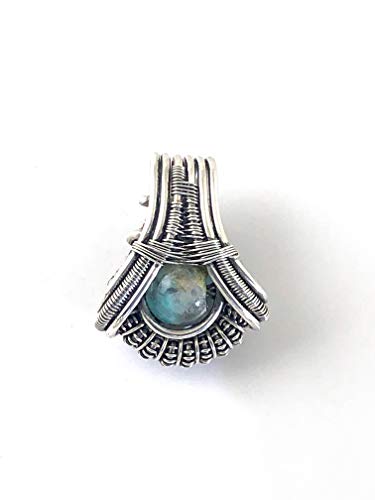 We admit it. We're obsessed with Ajoite. There is no doubt that Ajoite is an important metaphysical stone and is much sought after by crystal lovers. Francis has been wearing a small Ajoite pendant for a couple of decades now and has become quite enamoured of its resonance. Its peacefulness and expansiveness have become a frequency that feels like home to him. In the years since he purchased his, Ajoite has become quite rare and extremely expensive. A great deal of its appeal comes from its extreme rarity. Only two substantial discoveries of Ajoite have ever been found. As of this writing, both of these locations are exhausted. The only Ajoite seen in the marketplace comes from old stocks from the original two African discoveries. Ajoite's energies are so emotionally soothing and healing that many people break into tears the first time they hold a piece of it. Some report that Ajoite connects them to the heart of the Earth itself. It is believed to transmute negative energy to positive energy and to relieve unhappiness. Ajoite emanates one of the sweetest, most nurturing and loving energies of any stone in the mineral kingdom. Many compare it to the love of a mother toward her child. As gentle and loving as its frequencies are, Ajoite is also a stone of immense power. It carries the power of Awakening in the very bandwidth of its resonance. Ajoite can be used as a vibrational runway to expand consciousness and spiritual awakening. It can expand consciousness so rapidly that it can feel like a spaceship blasting into orbit! Ajoite's paradoxically gentle energies can draw out from the physical, emotional, mental and spiritual bodies any toxic emotions, thoughts, beliefs, constructs, or blockages that have prevented the influx of higher energies, thereby enabling your whole being to evolve spiritually. We are pleased to be able to offer this Ajoite pendant at a price that we believe is fair and affordable.