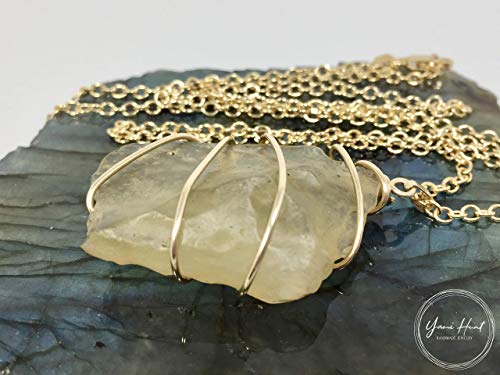 This beautiful necklace features a Libyan desert glass pendant wrapped in 14k filled gold wire. The chain and clasp are also 14k gold filled. The necklace in the photo is the one you will receive. The stone itself is 34 carats . Libyan desert glass is dated between 26 to 29 million years old and is found only near the Libyan - Egyptian frontier. It has been appreciated for millennia and was featured in the Egyptian king Tutankhamun's burial chest piece carved into a scarab. It was believed by the ancient Egyptians to be a talisman to ward off negative energies and guard one's soul on the journey to the afterlife. It is believed to have been formed as a result of an ancient meteor impact.